Act of Kindness: Helping a Man in Need 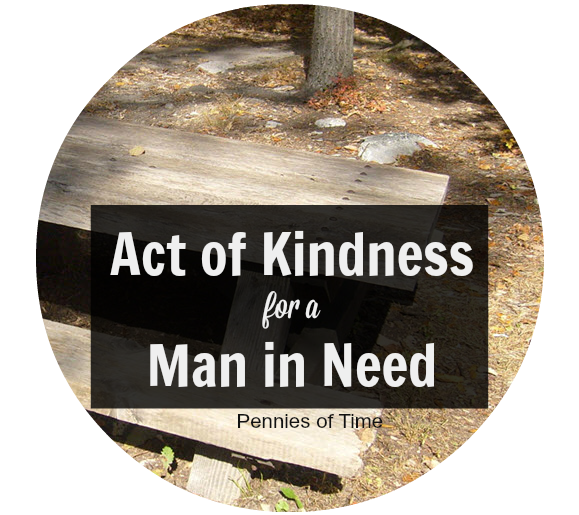 While out celebrating a birthday, we noticed a man at a picnic table watching another family eating. He was sitting to the side, watching the family, which, it turns out, was also celebrating a birthday. As I watched the scene progress, I noticed that the mom of the group was uncomfortable with his quiet observing.

We realized he was probably hungry. Dad, Big Brother, and Little Brother walked over and asked him if he would like a meal, and he gratefully accepted the offer.

Hopping into a nearby bar-b-que place, they bought him a meal. When delivering, they asked him if he wanted company while he ate his dinner. The boys were thrilled to hear him say, “Yes.” He introduced himself as Sam and a friendship started.

The boys learned so much about his life and that he was homeless. They learned he had been homeless for two years after a fire destroyed his home, and he lost his job. His possessions were in a safe place in a ditch about a mile away. He didn’t seem angry or super sad as he described his situation. And, he was equally engaged about the boys and what they liked to do. It was a shared experience of getting to know one another, treating each other with kindness.

At the end of sitting with him, the boys gave him a homeless care kit (we always keep one in the glove compartment).

This was a very easy act of kindness for us to do. We gave him a homeless care kit that we had already put together for under $6. We spent $7.56 on a meal for him and 20 minutes talking with him. I can’t say how it affected him. But, I know that my family enjoyed the interaction, and we all learned more about his life.

Yes, he was dirty. Yes, he smelled.  Yes, his clothes were odd for the temperature outside.

I think back to how uncomfortable the mom of the family next to him seemed. I don’t know what she was thinking, but many times people are fearful of the homeless. I think that when we are thoughtful about the situation and open our hearts to the needs of others, asking them how we can help, we find opportunities that teach us.

Each time we actively learn what it is like to be another, we are developing our skills for empathy. Doing that has really helped the urgency that all of us feel towards being kind to others.