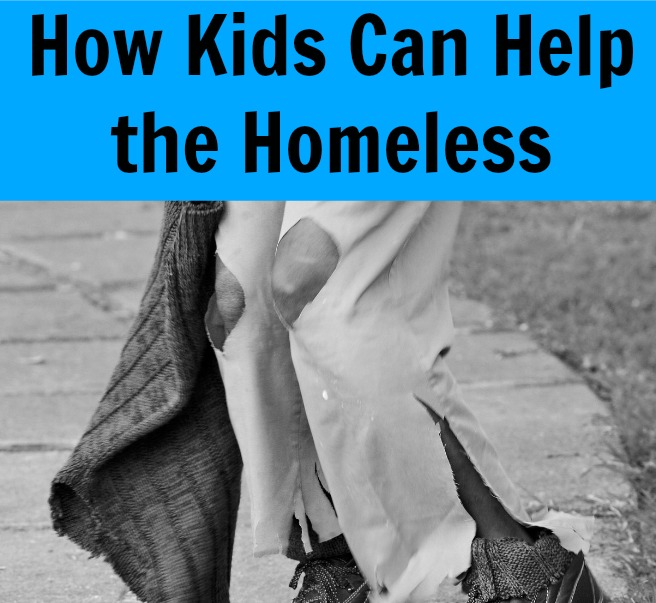 While on our Kindness Quest during Spring Break in New Orleans, both boys were extremely concerned about those that were homeless. We had prepared two homeless care kits, but that preparation was inadequate, in their eyes, for the need they saw on the streets, highways, and hiding in stoops of buildings.

We quickly handed out the money we had budgeted to helping the homeless a couple days into the vacation. Budgeting how much money we will hand out is one way we are currently trying to figure out what to do besides the homeless care kits. We don’t normally carry cash but making sure that we have our budgeted amount when we go out to sightsee was very helpful. (Some people don’t feel like giving money is appropriate. That is fine. We give money when we feel inspired to help, and we try to help in other ways when we feel uncomfortable in giving money such as: offering to buy food or supplies and handing out care kits.)

Early on in the trip, a stranger asked for 75 cents to catch the bus. He was running late for church, for his baptism. We gave him what change we had from our car, and it sparked a thoughtful discussion as we saw him approach others in the parking lot and got the brush-off from them. I asked the boys if they believed his “late for church” story and were they concerned about what he spent the money on . . . After some deliberation, Big Brother responded:

“Mom, it doesn’t really matter. He told us he had a need. We had some coins.

It felt right to help him, and it still feels right.”

One thing to know about Big Brother is he is empathetic and money minded. He usually has an item he has plans to save for, and he really enjoys buying souvenirs. One day while meeting friends in the French Quarter, Big Brother huddled next to me and said, “Mom, I really want to give that man my money.”

He subtly motioned to an older gentleman sitting on a high stoop next to the building. As you can imagine, he was not clean and looked quite in need of care and attention.

“Can I?” Big Brother whispered urgently.

Big Brother walked over to him, and I heard him introduce himself. At that point, I was distracted and stopped listening, moving my attention away from him.

The next thing I know, Big Brother is back at my side and said, “I made a new friend.”

“Did you give him your money?” I asked.

“Yes,” he said quietly, and I could tell he was deep in thought.

Our next stop was to get some ice cream. As we were in line deciding what on delicious flavor of gelato (better than ice cream), Big Brother leaned over, “Can we get him some ice cream?”

I knew which person was “him” immediately.

We walked back over to our previous stoop, and he was still there in the stoop, sitting quietly. Big Brother became uncharacteristically shy.

So, I initiated the conversation by introducing myself and offering to buy him a sandwich or ice cream. The man declined, and we started talking about the city, his neighborhood.

Porkchop was charming as he shared stories of his mother’s ingenuity. His left eye was blind but both eyes sparkled nonetheless with recollections and our laughter. He would often pause in the story to shout out a “Hey” to a person passing by and throwing out a joke along with the greeting. The person, obviously knowing Porkchop, would respond in kind, smiles all around.

Quickly in the conversation, Big Brother shed his shyness, and this homeless man and this 8 year old giggled and shared. Before I knew it, thirty minutes had passed and we were still talking, all three of us sitting in a small stoop as Porkchop talked about his childhood, the jobs he’s had, and his neighbors that he loves.

We offered to buy him food before we left but he declined. He said he was good and glad to meet us.

Later, Big Brother asked several questions about his new friend:
“Mom, I had a hard time understanding him sometimes.” It led to a conversation about how the gentleman’s oral hygiene was poor and his lack of teeth affected his speech.

“Mom, I noticed a brown liquid leaking from his pants.” Wow, I didn’t notice this, and it sparked a conversation about healthcare for the poor and elderly.

(And you know what? A little later I realized that neither one of us actually bought ice cream, too involved in making a new friend. How nice! Big Brother said: I’d rather have a new friend than ice cream.)

Little Brother is like his dad: he has never met a stranger. While walking around, he was extremely comfortable taking a seat near someone in need right on the dirty sidewalk and striking up a conversation. He would often become impatient if we had nothing to give the person in need and didn’t have the time to stop and talk long. “But, he needs us, Mom.” That is true.

At one point during the trip, we were sitting completely at a stand still in traffic. Little Brother was completely absorbed with his legos in the backseat, and Big Brother noticed someone in need right beside our car holding a cardboard sign.

Big Brother motioned the homeless man over to give him one of our homeless care socks. At that point, Little Brother woke up to the situation and rolled down his window to start talking to the man in need.

Spying the legos, this man lit up with excitement and described how he loved playing with legos. From that point on, for at least ten minutes (very bad traffic), Little Brother and this gentleman discussed legos, Transformers, and buildings, chatting the entire time on the side of a highway, stuck under a bridge that sheltered us from the rain.

Little Brother had a messy face and t-shirt, his nails were filthy from playing all morning. No one cared. The man in need was wearing 3 coats and his face and hair were as dirty. No one cared.

As we pulled away and said goodbye to our new friend, I realized that Little Bro sees those that are “homeless” as individuals to get to know, just as if meeting a new pal on the playground. 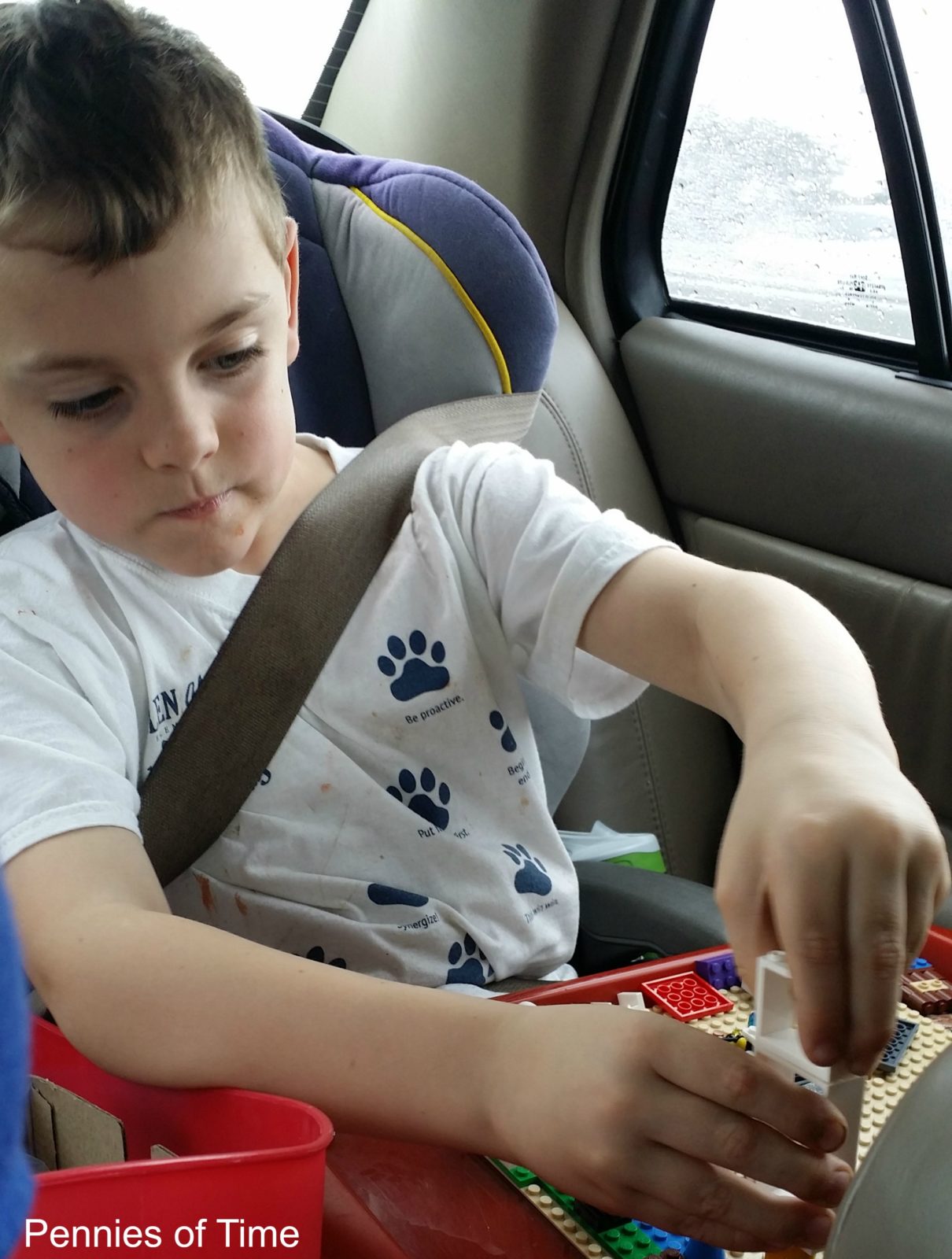 We have had many experiences to learn about the needs of the homeless and how to help. But still, I experience feeling of loss to be able to answer all the questions that my boys have. That’s okay. They realize that it is a difficult need.

We’ve discussed with the boys how to help those that are homeless with ideas ranging from  Big Brother’s idea about microloans, to helping the boys manage their frustration when we have nothing to give. We have discovered that a kind word, a conversation, and the acknowledgment that they are people with feelings brings as much gratitude as if we had given them something. I don’t have all the answers. But, I know that as we open our eyes to the needs around us that it helps rather than making the problem worse.

Tips on Teaching Kids about the Homeless:

Don’t ignore those that are homeless. If you don’t have something to offer, you can always smile and give a moment to wish them a nice day.

Be okay with admitting to your kids that you do not have all the answers. It brings out an opportunity for them to brainstorm and come to answers on how to help as a family.

If you know you will be faced with many requests for help from those in need, as a family, discuss how you can help ahead of time. That way you feel ready and prepared when the situation occurs.

Use experiences to teach your kids about the needs of the homeless:

If you feel inspired to do so, befriend the person in need. It was clear that Porkchop’s neighbors check in on him and one planned to see him later that evening. Be neighborly, be a friend.

Want more examples? I’ve some good ones to share:

An example of a school helping from the Corner on Character: #Kindawesome.

An experience from Let’s Do Something Good Together: How She Helped a Homeless Man.

Stories of those that are homeless from The I Have a Name Project.

How a Trip to the Playground Turned Into a Lesson on Empathy, Kindness, and Gratitude from Discovering the World Through My Son’s Eyes.

Teaching Little Hands to Help from The Good Long Road.

I Always Buy My Own Food by Ripple Kindness Project.

How do you respond to questions that your children have about those that are homeless?

More in this Series: Act of Kindness Road Trip 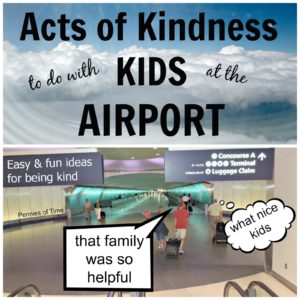 « Previous
Acts of Kindness at the Airport 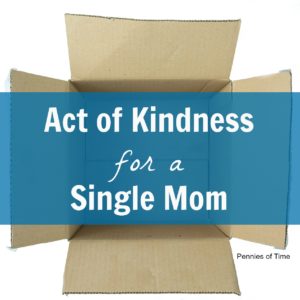 Next »
Act of Kindness: Helping a Single Mom