Caroling for the Elderly 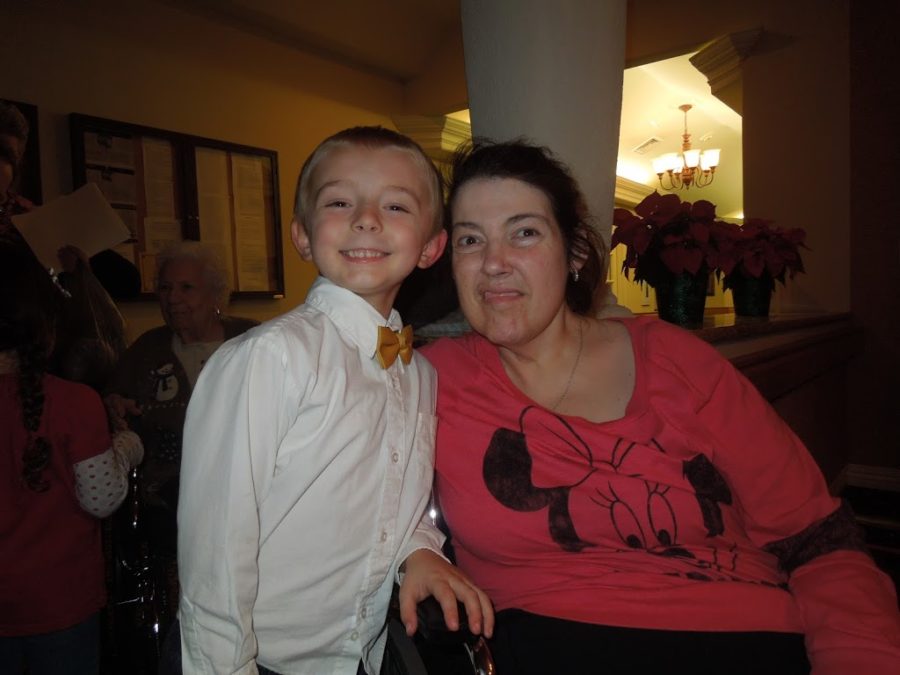 This evening, we gathered with friends and went to a local nursing home to sing Christmas carols.

It wasn’t hard to set up and what made it easier was that a friend wanted to do it with me!  I spoke to the Director at the nursing home a couple of weeks ago to set a date and time.  I explained to her about how many people we thought would come and what songs we wanted to sing.  She was excited about it and made sure that the staff knew that we were coming.

We got the word out to our friends and then put together the lyrics of the songs and made copies.  My “Hostess with the Mostest” friend nicely offered to host us at her house afterward with hot chocolate and cookies.  A perfect way to end the evening!

We had friends from 7 families join us at the facility.  The aides and nurses wheeled the residents into the lobby where we were going to sing.  We took the time to introduce ourselves and talk to each resident.  I was just amazed at the maturity and gentle nature of the children when talking to the residents!  They weren’t shy at all to walk up to each one and introduce themselves.  (My older son even included his brother by introducing his brother to the residents as he met them.  It was like I almost didn’t even need to be there.)

I handed out copies of the lyrics.  My friend handed out bells to the kids (genius!).  I didn’t take the time to count how many people were gathered there.  (I also forgot to take pictures until the very end.)  I’m going to guess that we had at least 15 residents with us for most of the time.

It was just an amazing experience.  Lovely.  I wish you could have been there to hear the residents sing with us.  There is something about singing while someone is singing to you at the same time.  We were singing to them, and, as they joined in with us, they were singing to us.  Combine that with the fact that they were songs about the birth of Jesus, which are songs that are special to our friends and family.  What a marvelous feeling in that room!

My boys and I were able to see a couple of residents that we had previously visited when we went there for the boys’ party.  It was nice to see them.  My 6 year old gave one of them his bell.  Her name is Sylvia and she cannot talk.  She gestures as best as she can.  Friends, I wish you could have seen how her face lit up to have a bell in her hand.  She said thank you in her way and clutched the bell to her chest.  And then she waved her hand.  The smile that appeared as she heard the ringing it made.  Sparkling eyes, a gorgeous smile, and a gentle wave of her hand to make the bell ring.  Tears came to my eyes to watch such delight in a sound, and, I am in tears, again, as I write to share this.  Something as simple as a child giving her a bell gave her so much pleasure.

One gentleman we visited with had served in the same wars as my grandfather did, and it was nice to listen to him recount some of similar experiences that I would hear Grandpa talk about when he was alive.  This man had a genuine interest in my boys (and one of them ran circles around his wheelchair).  And, such a heartfelt thank you from him as we left.  He was thanking us, but I just wanted to give him a big hug and thank him.

We did take the time to visit with the residents when we were done.  It was hard to leave; we wanted to talk more.

Afterwards, we had the most delicious hot chocolate (and fudge) at my friend’s house.  (And we each brought cookies.)  A perfect way to chat with friends after having such a meaningful and gentle service experience.  Serving with friends.  A very special experience.  We will be doing this again. 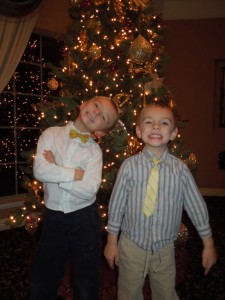 In front of the tree at the nursing home.  They proudly picked their own clothes for the evening.
NOTE:  I just wanted to further express how special it was to serve with friends.  One friend even had to leave her husband behind to join us as he became sick unexpectedly.  What commitment to being an active part of a service experience!  It was lovely to see the grace and talents that my friends have in reaching out to others that have a need.  It was humbling to see them support their children in having such a positive experience.  I am lucky to be surrounded by friends who see the value in service and value loving others.  Serving with Friends Rocks.