Got Small Kids? Don’t Give Up 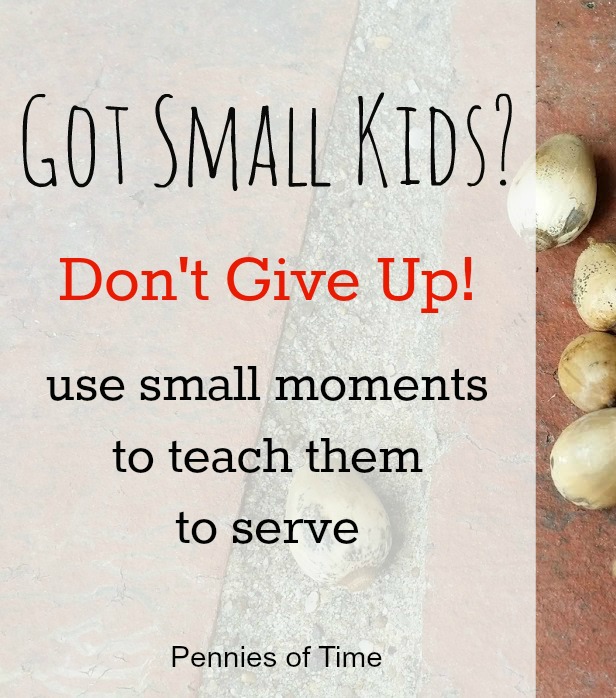 SueAnn is sharing her thoughts on serving with kids, here, on Pennies of Time.  Known for her compassionate nature and quick wit, I know you will enjoy her perspective of being a mom with young kids and still striving to teach them to serve others.  Thank you, SueAnn! 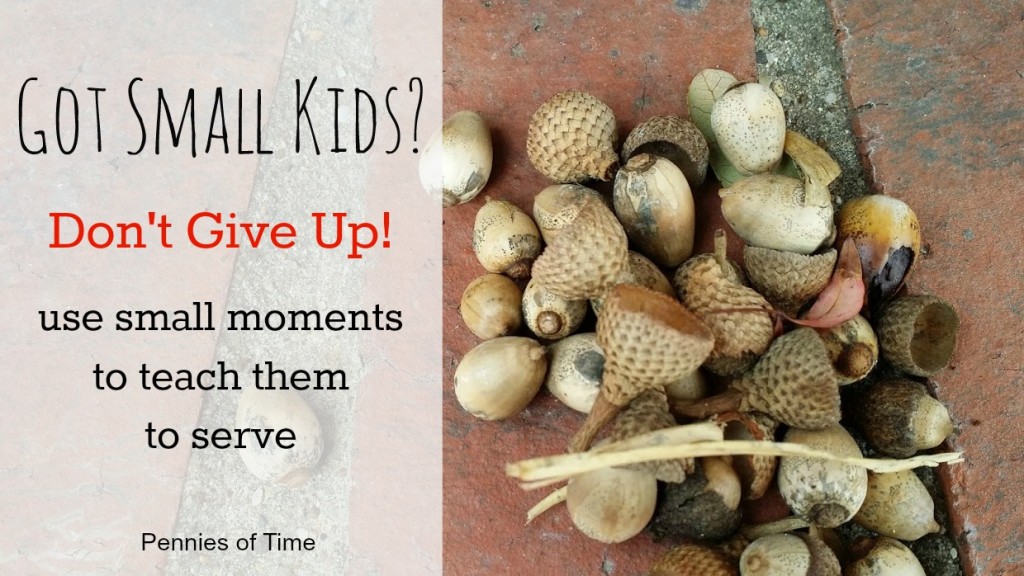 As the mother of 2 small children and a baby, I’ve been struggling with the logistics of teaching my kids to serve. In the past, my efforts to find avenues for teaching compassion and thoughtfulness were met with the message that “they’re too young” or “you can teach them when they get older.”  Still, I was haunted by the feeling that I was failing them by postponing those lessons. I wanted to find a way to cultivate the innate compassion that so many children possess.

On my more optimistic I’m-Having-A-Good-Hair-Day days, hands-on volunteering with small children was daunting, but seemed doable. Then I’d have one of those other kind of days.

Parents, you know what I’m talking about—the kind of day when you find yourself leaning quietly against the bathroom wall, stealthily eating a Snickers Bar and a drinking a Pepsi while watching those little fingers wriggling beneath the locked door. I’d think about serving with my children on one of *those* days and think, “Nope.”

But I still wanted to do more than simply donate our old stuff to our local shelter. Don’t get me wrong, donating is good— material needs are very real and so many times, we have perfectly good stuff to give. But my kids were missing the point—and still are. Even as recent as a month ago, one of them said, “Can we get a new (insert name of hot, new, mind-blowing toy)?” When I said, “No, Hon, you already have one of those,” the response was “Well, we can just give that one away.” (Sigh).

As you can imagine, my heart skipped a beat when I learned about Pennies of Time. Here was someone else who was having the same thoughts that I was. And she was doing it! She was serving with kids and making it happen!

Over the last year and half, I’ve been integrating Pennies of Time Adventures into our life whenever possible. I’m not gonna lie—I have struggled to get it off the ground in our family. Since Pennies of Time’s inception, however, I’ve been either pregnant or toting a newborn, which means it’s difficult to do—well, pretty much everything. Some days I can’t remember if I showered that morning, so I try to cut myself some slack here.

The upside of being swamped and having “baby brain” while attempting to serve with my kids is that I have learned a couple of things about successfully integrating service into our family life.

Before I go any further, I should confess that I have a tendency to be overzealous and if something is easy, I promise you,  I will make it complicated (as if having three kids isn’t complicated enough). This is how it usually works:

First, I get really excited about an idea.

Second:  I overthink it.

Third: I over-plan it.

And, last but not least: I grab onto that plan and I refuse to let go–in much the same way that a toddler holds on to an urgently-mewing cat’s tail. Not that we’d know anything about that . . .

That last part—clinging to the plan—is a bad omen for any activity with small children.  Children are messy, impulsive, and beautifully intuitive. And life with them is unpredictable and busy. As Jerry Seinfeld says, it’s like having a blender with no lid.

A couple of weeks, ago, I decided that we would bury treasure at the park (we live in a mild climate, so kids play at the park year-round). But, the weekend got away from us and I felt like a failure because I hadn’t been able to pull off my plan.

Late Sunday afternoon, we unexpectedly found ourselves at the little park on our street. I didn’t have my phone (or our treasure) with me and, before long, I got bored. So I started cracking and peeling acorns.

Now, anytime my kids see Mommy stomping on something without saying bad words, they know something is up, and it’s probably something cool. So they immediately came over to check it out. Pretty soon, we were all cracking, peeling, and piling our acorns.

It did not occur to me that we were in the middle of an Adventure until my kids started piling up all the acorns and building a little spread for the squirrels.

They said they were preparing the Squirrel Feast for that night.

So, while we peeled, we talked about what other kinds of animals might also enjoy the acorns, how they might appreciate “already-peeled” acorns, and how the animals would certainly be ga-ga over the pine cone centerpiece that made the spread look fabulous.  We even went back the next day to see if the squirrels had chowed down.  Much to our delight, something had feasted. I’m not sure which animals can safely eat acorns, but there weren’t any animals lying nearby, so I think it was ok.

Initially, I wasn’t sure whether this “counted” as an Adventure. It didn’t seem like much and I hadn’t planned it—so it wasn’t “official.”  But I decided that it did, in fact, “count” because it engaged my children in a way that led to thoughtfulness and kindness. The thought of helping the squirrels by shelling their acorns made the kids feel happy.

They were proud to be part of something that benefited other creatures.

This activity also got them engaged with nature.

It made them ask questions such as: Which animals will eat acorns? Can people eat acorns?  What is the soft stuff inside the shell? What are the shells made of? Will this make the squirrels happy? They also had the tactile experience of cracking and peeling the acorns. This sounds like a small thing, but I think giving children the opportunity to interact with nature teaches them to appreciate it.

As for me, the girl who complicates things, I had a hard time letting go of my planned Adventure.

But I came away from our squirrel feast with a greater appreciation for the importance of Flexibility in successfully implementing Pennies of Time Adventures into our very busy family life.  But when I finally let go of my plan, I was surprised at how easy the Adventure felt. And, on the upside, I still have the treasure we didn’t get to bury. So that Adventure is ready to go, and I can save it for a weekend that is less busy. But it also means  I need to put the bag of bling in my van so that the next time we unexpectedly end up at the park, we’ll have our Adventure Gear. 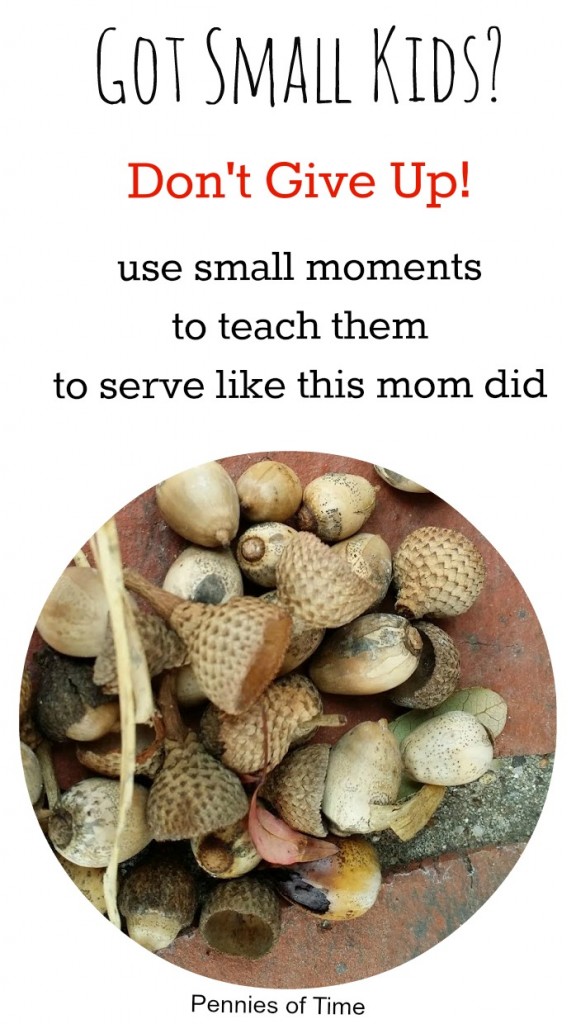 Sue Ann has a background in pharmacy and worked for many years in pharmacy practices at Walgreens, “dot-com” pharmacies, and the poison control center. She has spent the last 7 years of her life attempting to figure out how to raise her three children while also keeping up with current world events, pop culture, and technology. (This must be a work in progress because she is always the last to know what people were wearing on the Red Carpet, and she never knows how to use all the bells and whistles on her smart phone.) These days, you’ll find Sue Ann, volunteering at her children’s school, running errands, playing with her kiddos, and drinking a lot of Coke Zero. Her greatest goal is to teacher her children to be a positive force in this world.