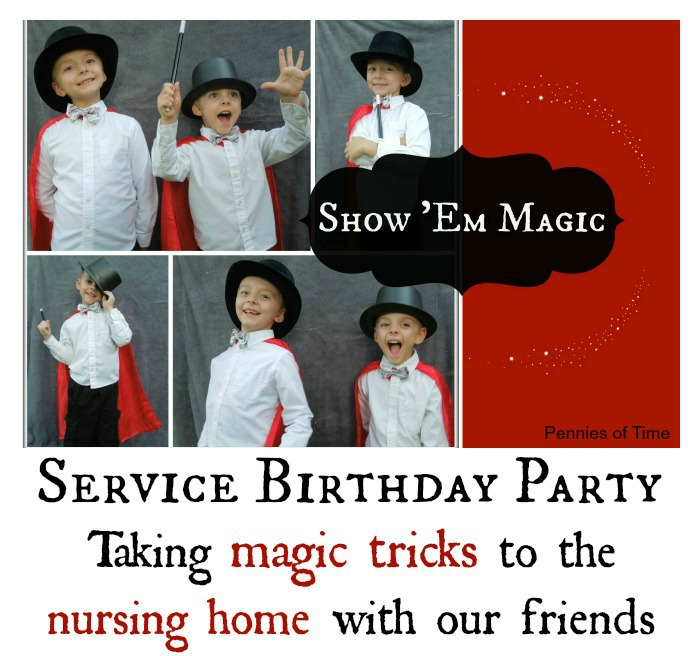 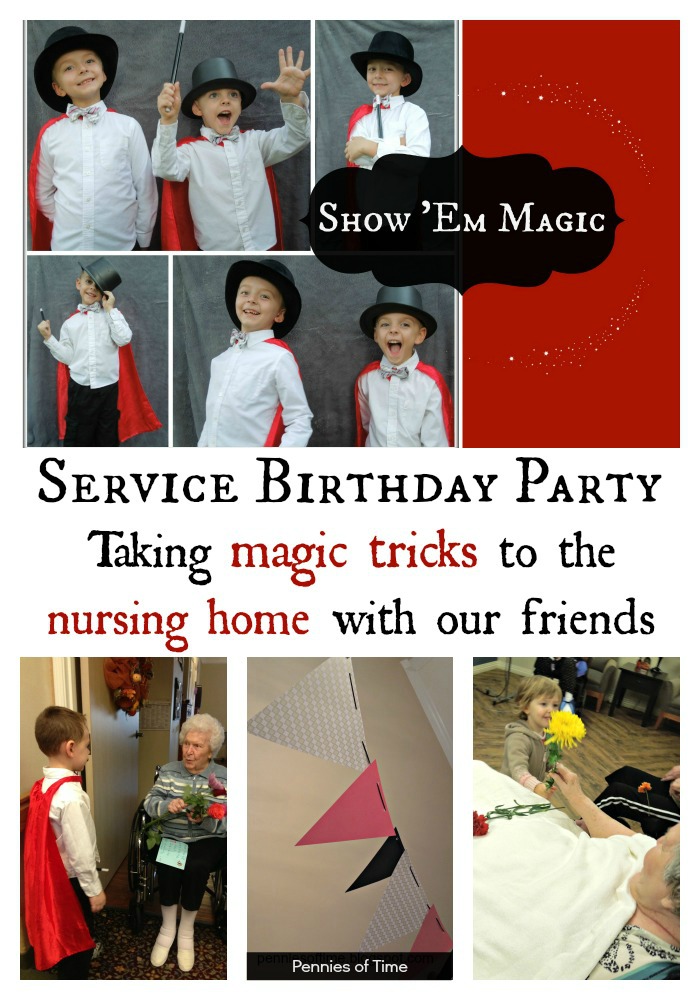 When the boys turned 7 and 5, they wanted to have a combined birthday party, again, at the nursing home like they did the previous year: Secret “Service” Agent Birthday Party

After some thought, they decided that working on fine-tuning their magic tricks and taking them to put on mini-shows for the residents would be a great idea for their party! After a bit more discussion, we put a plan together, practiced what we were going to say, and set a time to meet with the facility’s Activities Director.

The next day, we put on our best Magician faces and went to ask permission to bring mini-magic shows to the residents. 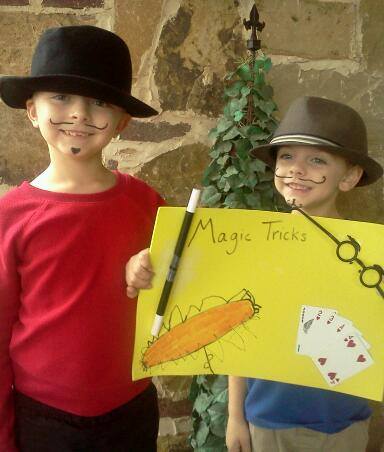 The boys used a board to remind them of what to ask and talk about during the presentation, the big idea being: Bring flowers for the residents as we do mini-magic shows at the doorways to their rooms. And, their presentation to the Director, filled with giggles and lots of ummms, went well. They were given permission and scheduled the date for their Magic Show!

To prepare, we sent out invitations describing our service birthday party. The boys wanted supplies to use for future service projects instead of gifts. 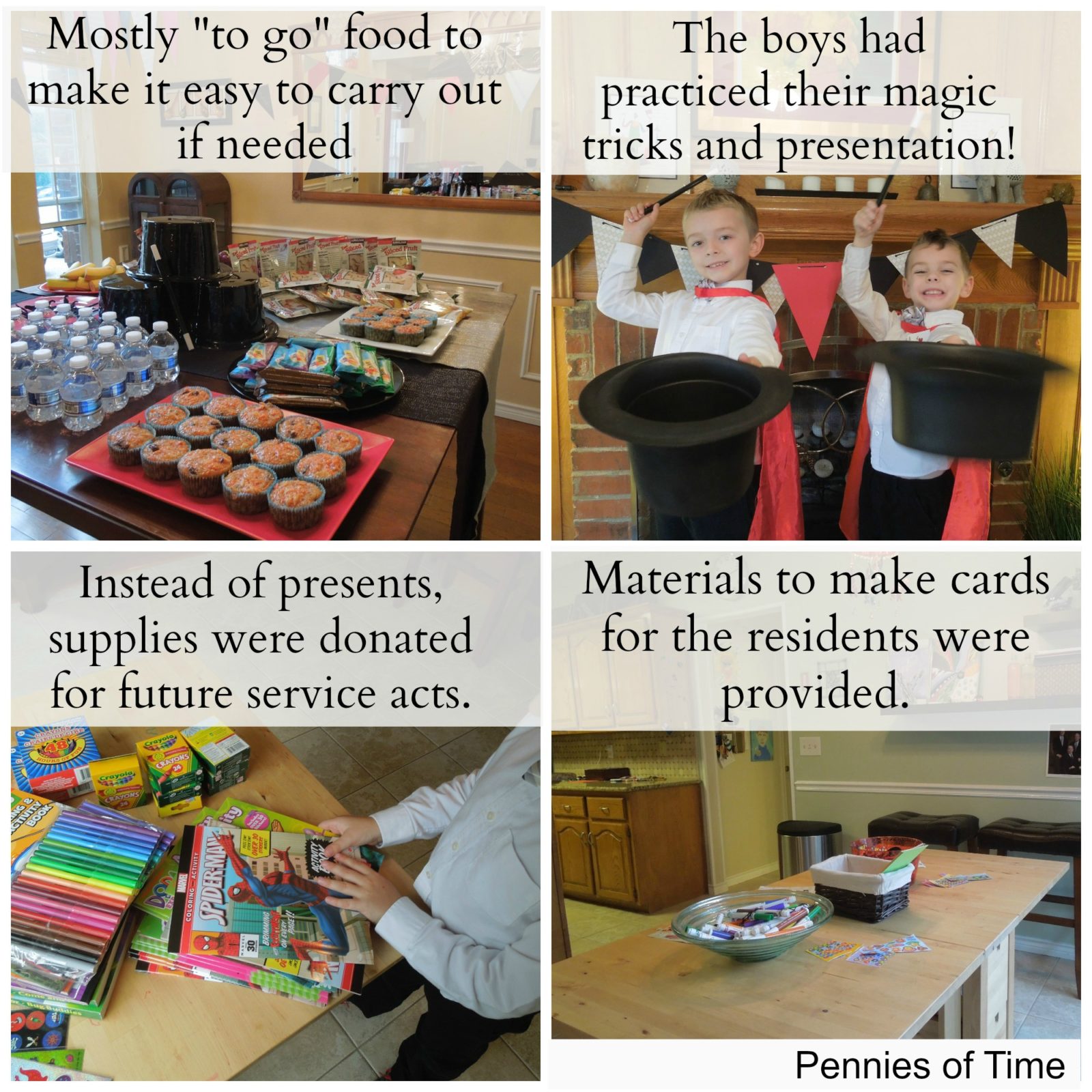 Once the guests arrived, Big Brother and Little Brother taught their friends a few magic tricks, and the whole group of kids made cards to leave with the residents after visiting with them (and they also brought flowers to give to them, too).

The kids were hysterical as the group learned tricks

with many of them devising their own “new” tricks!

With all the kids donning a magician’s hat and magic wands, we set off in a caravan to the nursing home for our mini-magic shows. Little Brother’s excitement couldn’t be contained as he ran to the front door!

The kids could not have been more charming! We broke up into smaller groups, received our “assigned” residents from the Director (she asked ahead of time for residents that wanted to see our mini-magic shows), and started on our way.

Using flowers, cards, and magic tricks provided an ice breaker for all the kids and really eased any fear or shyness that a kid might have had coming to visit a stranger. With 15 kids, ranging in ages from 2 to 7, the halls were immediately filled with giggles, laughter, hushed whispers of questions, and conversation.

The residents were FANTASTIC to the kids! They laughed at all their jokes, no matter how nonsensical, and ooooed and awwwwwed at all the magic tricks, no matter if they were “real” tricks or not.

This picture is one of my absolute favorites. Taken during a thoughtful pause during a conversation between Big Brother and a Veteran. I am always amazed at how quickly friendships spring up during these visits.

After over an hour of invading the nursing home, our time for the magic shows was over, and the residents started getting ready for lunch. It was quite hard to get several of the kids to disengage and make their way to the front door.

As we were leaving, we met Lucy. She is a blind cellist and has a FANTASTIC sense of humor. To show her our magic tricks, she had us describe what we were doing (except for the secret to the trick, of course). After we showed her our tricks, she showed us one of her own by reading the “bumps’ next to each door.

“What? How did she know that was the library without seeing?” exclaimed Little Brother. (She did let him in the secret of Braille.) 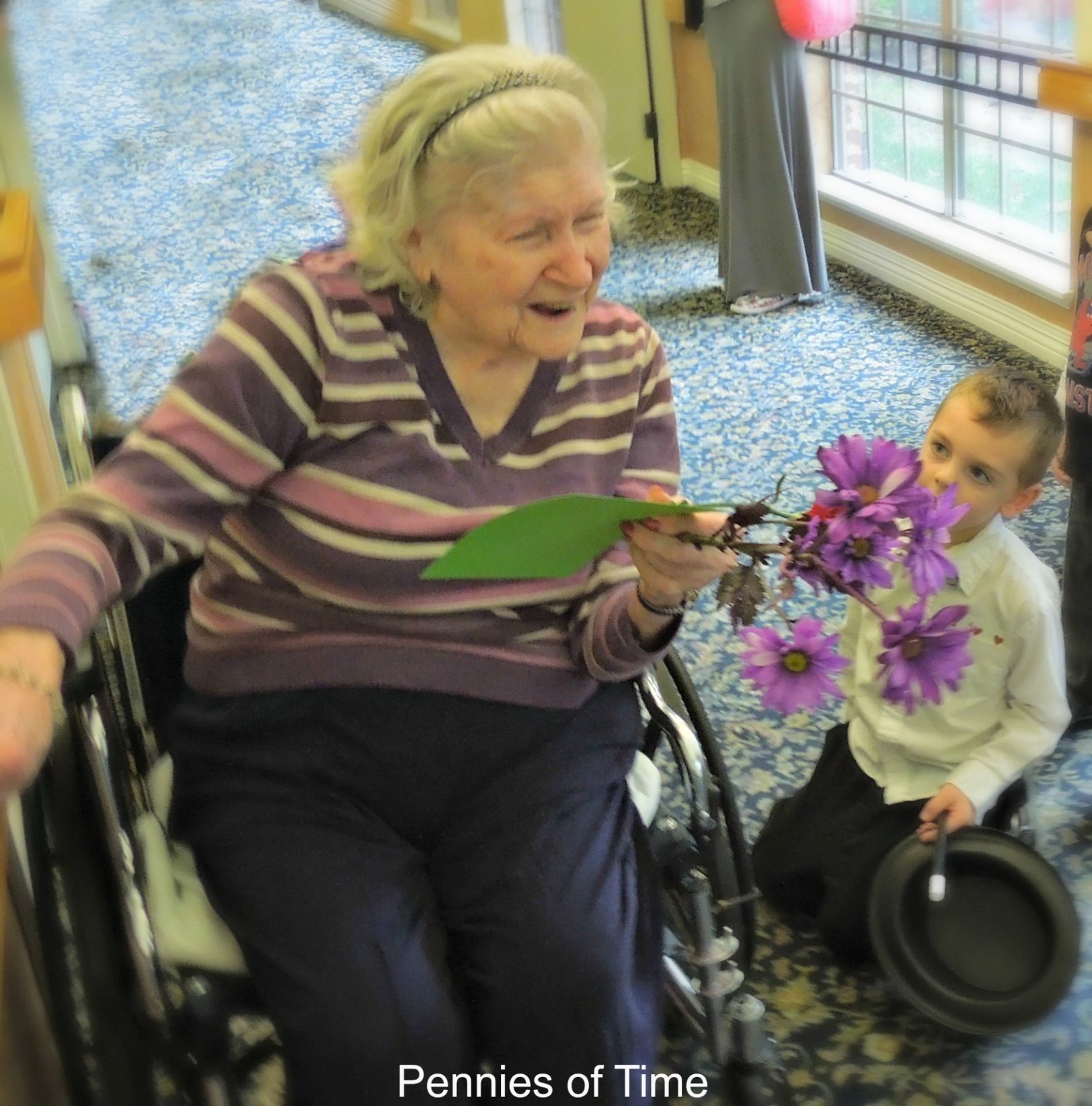 The best kind of birthday celebration.

More in this Series: Birthday Kindness 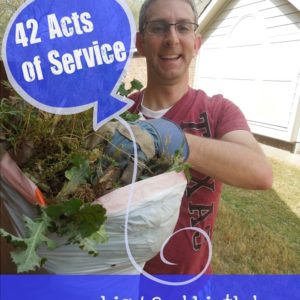 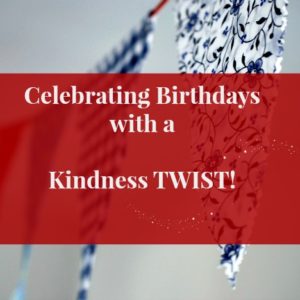 Next »
Celebrating Birthdays with a Kindness Twist