The 4 Year Old with the Worst Case of the “I Wants” Meets, um, Dog Poop? 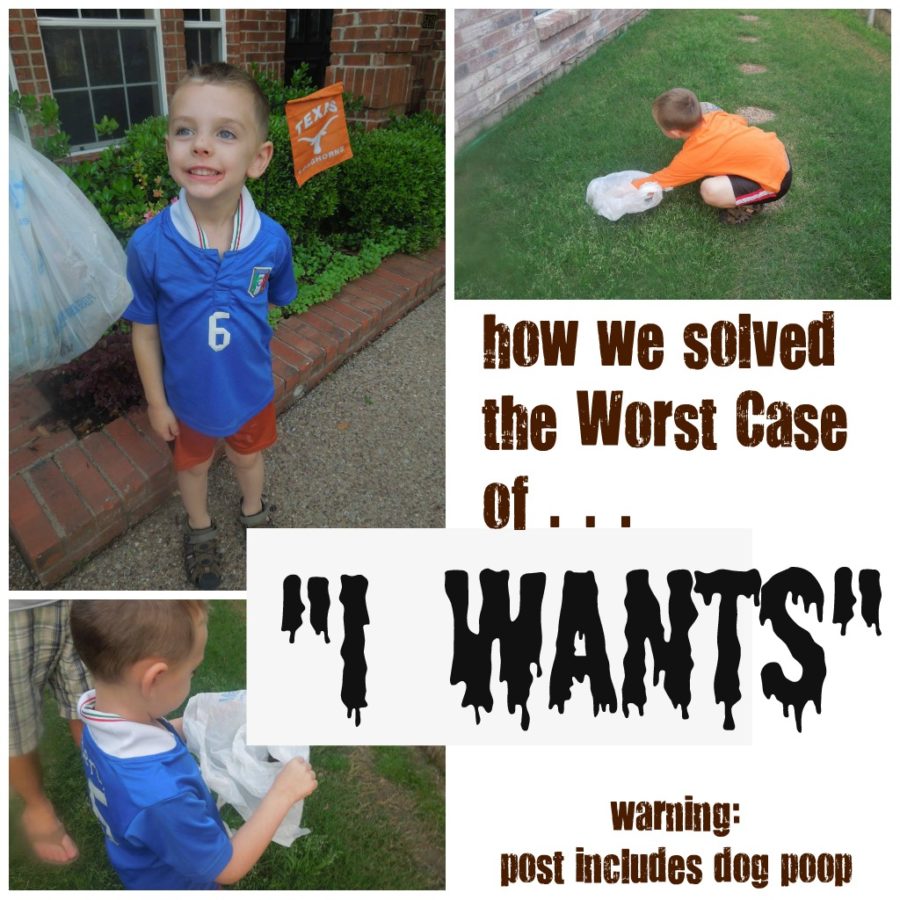 My four year old was all about him, which is pretty unusual for him these days.  Worse than that, he was RUDE about it.

So, I sat him down on the couch and we had a chat.

Me:  What are things that are important in our family?

4 Year Old (getting the gist of what I might be saying):  We ask nicely.

Me:  Yes, we ask for things nicely.  What else is important?

4 Year old:  Being nice to brudder.

Me:  Yes, it is important for us to be kind to each other.

4 Year Old (waiting for the other foot to fall, so to speak):  Yeah.

Me:  What else do we spent a lot of time doing?

Me:  Were you kind to your dad just now?

Me:  Have you been helping your dad tonight?

Me:  I think I know what the problem is.

My four year old looks up.

Me:  You have the WORST case of the “I Wants” I have ever seen.

Me:  What do you think we should do?

At this point, the frustrated older brother yells across the room:  Punish him!

Instead, we talked about how he was focusing on himself.  We talked about how the fastest way to get rid of the “I Wants” was to focus on what someone else wanted.  After brainstorming a couple of things, he decided to go help out a neighbor.

The boys talked about what could be done to help a neighbor.  At this point, the 6 year old wants in on the helping action.  It will now be a Duo cracking down on The Worst Case of the “I Wants.”   Cracking me up!

The 4 Year Old with the Worst Case of the “I Wants” decided which neighbor to help.  He started thinking about what he could do, and then big brother piped up with the following suggestion:  We could pick up the dog poop in the backyard.

Yes, Ladies and Gentlemen, the 6 year old suggested picking up the poop.  He wanted to help out a neighbor by picking up dog poop.

The 4 Year Old with the Worst Case of the “I Wants” decided it was a brilliant idea.  (wwhhhaaa? okay.)  They ran upstairs to get dressed and we were off. . . . and, yes, the boys were running to pick up dog poop.  (I thought that it would be washing a mirror or taking out trash . . . nope, dog poop!)

The 4 Year Old with the Worst Case of the “I Wants” was in charge of telling our neighbor why we were there.  He did a pretty good job with just a bit of coaching.

And, yes, our neighbor was surprised!  But, he, thankfully, let the boys complete their mission.

The 4 Year Old with the Worst Case of the “I Wants” pretty soon figured out that it was not as exciting as he previously thought . . . he started to say,”I don’t want to . . . .” and then he had to stop because he heard his “I Wants” coming out again.  Instead, he replaced it with,”Poop stinks.”  Yep!

In the end, The 4 Year Old with the Worst Case of the “I Wants” did pick up the dog poop.  And, you know what, it ACTUALLY helped!  By focusing on someone else, it was like the cycle of grumpiness and rudeness was broken.

YEEHAW!
And, the older brother, the one that came up with the idea, he was a ROCK star!  That boy picked up dog poop without complaining which led to a conversation about taking care of animals.
If your kid wants a dog, go have that kid pick up dog poop.  🙂  We had a great conversation about responsibility, um, and dog poop.
Dad was right there in the middle of the action.  In fact, he pulled all the weeds in the lawn while the boys picked up poop.  We left that lawn better than we found it! 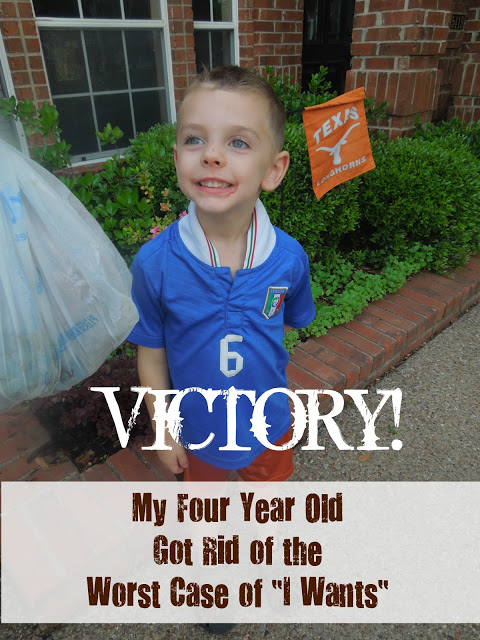